Tanora wrote:Hurling Quarter final moving to Croke Park this year. 2pm throw-in for us....... unless Westmeath cause the biggest shock in hurling history.

Bloody hell, what in God's name was wrong with having this fixture played in Thurles?? Being dragged up there to play them in their second home......
Top

Heard today that Walsh isn't as bad as first thought. Still a horrible injury but they are hoping he will recover in 3-4 weeks. So could be back for semis if Cork get that far!
Top

Matty Hislop wrote:Heard today that Walsh isn't as bad as first thought. Still a horrible injury but they are hoping he will recover in 3-4 weeks. So could be back for semis if Cork get that far!

Walsh's injury is an opportunity for others to stake a claim. Lehane is the obvious one but a very different type of player. If using a ball winning target in the FF line is part of the plan then Dalton and O'Mahoney are the stand-out candidates.

Personally, I'd go for TO'M. His best hurling has been in attack, and in particular up very top. But I wouldn't start him against Westmeath. I'd hold him back for KK...then unleash the relatively unknown quantity for the purpose of maximum impact.
Top

The Cork Senior Hurling Team to play Westmeath on Sunday has been announced.

Changing it up a little bit. Tim O'Mahony gets a go at MF this time. Story with Keraney?
Top

tipp-ex wrote:Changing it up a little bit. Tim O'Mahony gets a go at MF this time. Story with Keraney?

Looks like they are giving the subs that usually come on a run out. I would of like to have seen Dalton starting.
Top 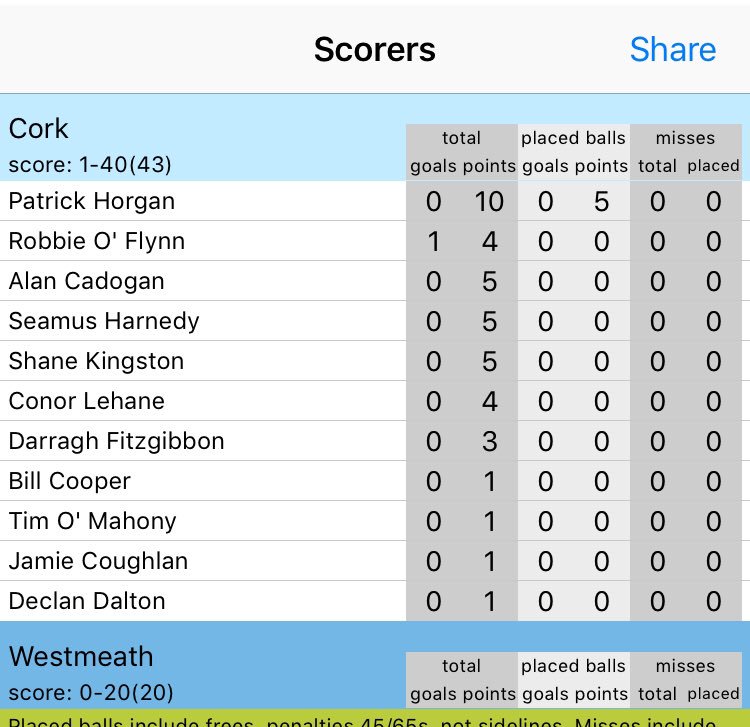 it was a non match from the throw in,where Cork started with the full forward line in the half forward line and vice versa .Westmeath tried every possible tactic to try and stay in the game ,mass defence,flood midfield ,go 15 on 15.All to no avail,they could have scored more that 20 had they not been so profligate in front of goal,and had they played a full forward line .Nash is now worth at least 4 to 5 points a game to the opposition. Cork knew from the start that this was going to be a non game they ambled around the place like it was a puck around in the Pairc they made no effort to go for goals even when they were clearly on. Some players looked out of sorts,Touch was particularly bad for some. Team selection was strange,trying to make a midfielder out of TOM who doesnt look any more comfortable than he did at CB,why oh why does he not try him on the edge of the square.especially with Walsh out injured.It would give us a strong Cf AND If Harnedy went outfield.Our full back line and half back line were both poor ,every time the ball goes inside its panic stations.Today was no good to Cork and will be definitely of no use against kk next weekend.
Top
Post Reply
672 posts

Users browsing this forum: No registered users and 12 guests