Some reporter trying to create a story. It would have been more classy of Anne Downey to reply, "No comment".
Top

bitter+beatengaaman wrote:Anyone else think the Cork squad didn't do themselves any favours by warming down during the speeches?

Thought it was very disrespectful myself - or is it just a old tradition of standing for the winners speech that we don't really need to do anymore?

If it's necessary to warm-down, you have to do it soon as possible after the action finishes. By the time the speeches are over the sweat has soaked in and the body has stiffened.

It wouldn't bother me if Cork had won and the other team began their warm-down. No matter what the Cork camogie team does those days, it seems people are always out to portray them in a bad light.
Top

Cork were never totally secure in this match, as their scoring power almost completely dried up in the second half, leading to an edgy last ten minutes.

At long last Cork go top of the camogie table on 27 titles, one more than Dublin. Special day for Rena Buckley who has now captained both the camogie team and the ladies footballers team to all-Ireland titles. She also gave her entire acceptance speech in Irish.

It was a dogged tight match throughout, with Kilkenny defending in numbers and giving the Cork forwards little room. Cork were just three points up at the break, playing against the wind, but Kilkenny had levelled within ten minutes of the restart, with Cork finding it difficult to even get possession. Kilkenny looked to be in a good position when they went a point ahead with just a couple of minutes remaining, but Cork stuck to the job and equalised again on the stroke of time and got the winning point in the last of six minutes of injury time.
Last edited by Dorcha on Sun Sep 10, 2017 10:32 pm, edited 1 time in total.
Top

And the Cork-Meath intermediate game goes to a replay after the teams finished 1-9 apiece. 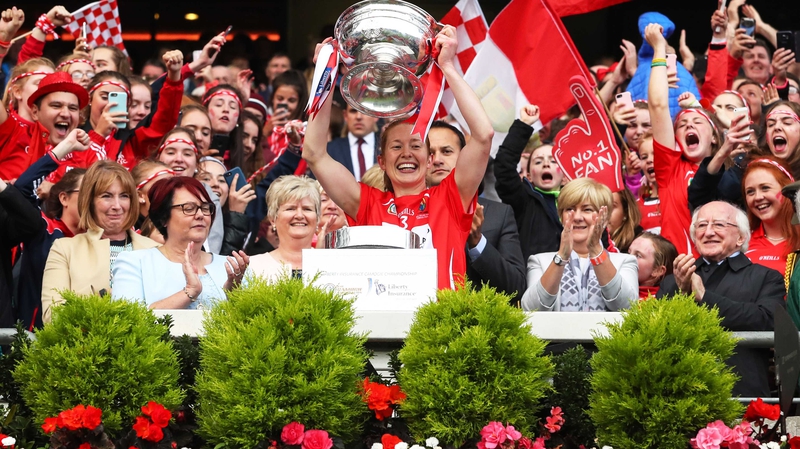 Great win for the seniors when it looked to be going away from them. The point Gemma O'Connor scored to level the game when KK looked to be about to finish the game off was worthy of any All Ireland in any code and the winning score was a great score struck 'in traffic' too. The Cork forwards would have had a lot of explaining to do to the Cork backs if they had left the game behind though. I heard some KK lady on Marty's show afterwards and she came across as a pretty sore loser giving out about the amount of injury time. She wasn't complaining when KK were looking to put the game away I'd say. Ref gave them another shot at getting up the field for a score or a free after the 6 mins had elapsed and Cork just defended it.

The intermediates were very lucky. Meath scored a point at the death but the ref had blown the whistle just before she struck it. Meath looked the better team to me. Cork struggled with their touch all day.
Top

Twohands wrote:The intermediates were very lucky. Meath scored a point at the death but the ref had blown the whistle just before she struck it. Meath looked the better team to me. Cork struggled with their touch all day.

42 seconds had been played over the three minutes of injury time when the referee blew the whistle. The ball had gone loose at that stage, as Cyril Farrell pointed out, and the whistle could be clearly heard as the Meath player picked up the ball. All the other players stopped when they heard it.

Undoubtedly the referee in the intermediate game was particularly fussy. I have no problem with frees being given for fouls, but some of them weren't even fouls. Every time a hurly connected with another a free seemed to be given. It was no doubt frustrating for both teams as it seemed to preclude any tackling.

Cyril Farrell commented specifically on the discrepancy between the refereeing of the two games and asked that the Camogie Board sort out how they wanted their games to be officiated. Anyone could make the same observation about hurling and football officiating!

In the senior game, it all boiled down to who had the most desire in the end, and Cork had buckets of that in the closing five minutes and extra time.
Top
Post Reply
58 posts

Users browsing this forum: No registered users and 21 guests