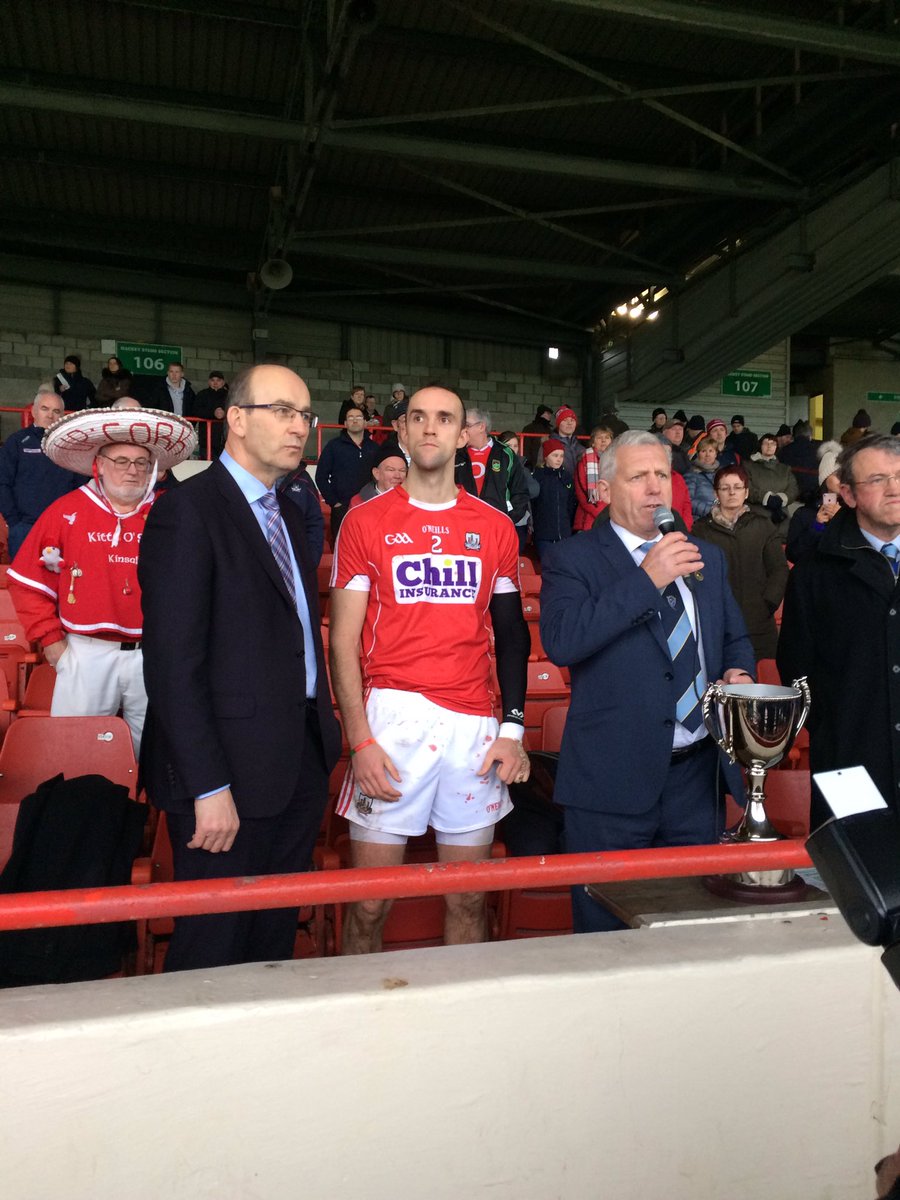 Matty Hislop wrote:Well done to the lads to dig out the result. Anybody at the match? Who played well etc, how did the young lads go?

Give em time to get home first boy ha
Top

Couldn't make today's match, any chance Over40hurler was at it. He could give us a good synopsis of every player,cheers
Top

1.A Nash-Kanturk-Did not have a good game,gave away a lot of possession on puckputs,didnt look to assured .
. Stephen McDonnell - Glen Rovers-Started slowly but really came into the game before going off injured
3 Colm Spillane - Castlelyons-Was poor and subbed at half time.
4. Damian Cahalane - St Finbarr's-As above
5. Mark Ellis - Millstreet-Ellis covered a lot of ground today won a lot of good ball but needs to deliver it faster as he gets caught in posession quite easily.CB only for me.
6. Christopher Joyce - Na Piarsaigh-Solid performance again.
7. Mark Coleman - Blarney-Did well for a newcomer even scorin a point.
8. Lorcan McLoughlin - Kanturk-I dont see what he offers at this stage,he cant win ball poor delivery when he does get it and feet are too slow.Subbed at half time.
9. Daniel Kearney - Sarsfields-Another good performance from him,not as prominent as other games but still worked his socks off.
10. Conor Lehane - Midleton-I dont know what to say about him,skill to burn but just does not show up or does for little camoes,lucky to finish out the game.No options on the bench is the only reason he stayed on id say.
11. Luke Meade - Newcestown-Another industrious performance works hard for everything.
12. Shane Kingston - Douglas-First touch was poor today but he definitely offers something going forward.
13. Alan Cadogan - Douglas-If this guy gets the right ball he is unplayable but needs the support of those around him.
14. Patrick Horgan - Glen Rovers-A lakclusture performance from play and from frees today,missed a couple of really important ones near the end.He doesnt work nearly hard enough.
15. Darragh Fitzgibbon - Charleville-Not his best game today,I would put that down to lack of experience.
Subs

17. David Griffin - Carrigaline-Steadied things in the fb line when he came in,does the simple things well.
18. Conor O'Sullivan - Sarsfields-Came in late for injured Mcdonnell,I would start him every day of the week.

20. Killian Burke - Midleton-Alittle shaky but improved as the half went on.

24. Dean Brosnan - Glen Rovers-I dont know what he offers to be honest,maybe closer to goal but not outfield.
25. Seamus Harnedy -St Ita's-A game changer.What a player.
The ref today was as bad as I have seen,for both sides.The standard of the game was poor enough but he helped ruin it completely.Limerick played a sweeper for most of the game and Cork did not know how to deal with it, and kept hitting ball after ball down to him.Limerick dominated for long spells but could not put scores on the board.I dont know if it was complacency but Cork 's work rate was way down on previous games but it was heartening to see them fight to the end,in previous years heads would have dropped and limerick would have run out handy winners.I know it is only a minor competition but it is good to see their attitude and desire to win.It wass also good to see management make the changes,fb line was being cleaned out and they acted quickly,hopefully it is a sign of things to come.
Top

Thanks for that honest assessment, Ove40hurler. Always interested to hear your opinions.
Top

Thanks Over40hurler for a thorough report, won't have to read the echo after that
Top

Fair play Over40, thanks for that.

Going by what you say its clear that our biggest problems still lie in defence, I was at 2 of the previous games and was of the same view although I thought Spillane, after a shaky start, played well v Waterford.

Intersting what you say about Conor Sull,and will be interesting to see what happens there longer-term as our FB line is the greatest worry. Either Joyce or Ellis at CB, and neither a wing back. Also agree on Lorcan, don't think there's any more improvement to come from him at this stage and the ceiling reached isn't high enough on the bigger days.

Glad to hear Meade did well as he was the newcomer that most caught my eye in previous games. Not agreeing with you for the sake of it but guess what, I agree on Lehane & Hoggie, - on their day they can be gamechangers but too often over the last few years have gone missing or not turned up. If that sounds unfair its because we expect more from them, including leadership. Cameos and the random brilliant touches and scores are not good enough, these guys need to be the ones to lead by example. Hopefully with a fit Harnedy, Cads, Kingston, and possibly Meade all pushing on, the competition and options up front are encouraging.

Anyway, good to win any competition however insignificant in the greatrer scheme of things. And so on to the league, we'll know a lot more about where we are in 2 months time.
Top

tipp-ex wrote:Going by the report there we played mostly poor yet still won

I was at it with my brother and as we were going away he turned to me and said "how did we win that".We won because we kept going to the end ,and we have Alan Cadogan inside,also limerick were not great.
Top

tipp-ex wrote:Going by the report there we played mostly poor yet still won

I was at it with my brother and as we were going away he turned to me and said "how did we win that".We won because we kept going to the end ,and we have Alan Cadogan inside,also limerick were not great.

Was thinking another long painful year ahead of us just before the goal put a gloss on things. Cadogan was deserved man of the match. He's not a big fella but he always shows for the ball and never give up. A pity the same can't be said of Lehane and Horgan. The talent is there but the temperment is wrong. Lehane has no stomach for battle and needs the ball in hand. Didn't win one dirty ball today. Horgan was constantly behind his man. In my opinion the team can't carry both of them at the same time. I'd be inclined to go with Hoggy because he has a bit more grit then Lehane and is capable of moments of brilliance when they are most needed.

All our forwards still need the ball served to them on a silver platter. At least Fitzgibbon showed for the ball, should have had a point and a goal but his finishing left him down badly. Hopefully that was just nerves and he will kick on. Meade and Kingston have potential but we will have to wait and see. I thought Spillane was having a hard time of it up to his subbing. Looks a bit small for full back. Would like see more of Griffin back there. Colman did OK in the half backs.

It's a long hard road to go yet and the league will be another big step up for these players. Having said that, the Munster Hurling League has been a worthwhile exercise and always good to get a win.
Top
Post Reply
1006 posts

Users browsing this forum: No registered users and 26 guests